The Origin by Irving Stone 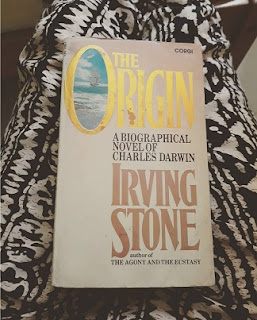 Charles. Darwin. A name so familiar in modern world, yet so little had we known about the person. I have read his magnum opus last year: On the Origin of Species, yet then I have only focused on his views on evolution and struggle for existence theory. I have never imagined, for example, that Darwin had made that famous voyage on board The Beagle in a so young of age of 22—in fact it was even his first voyage ever! Or, that he was NOT a Naturalist before the voyage; but was originally intended to pursue medical career—following the lead of his father and grandfather. He had failed; and finally made up his mind to take theological study at Christ College to become a curate, which was approved and encouraged by Robert Darwin, his father. Then, when Charles Darwin has finally settled his future career, came a letter from the Naval Office, inviting him to join HMS Beagle as its Naturalist—something beyond even Darwin's wildest dream.

While studying at Christ College, Darwin often accompanied Professors John Henslow and Adam Sedgwick, from whom he learned much about botany and geology. That, and his passion on nature (he liked to catch butterflies and even toads), that made him eligible to join the survey expedition conducted by Royal Navy. The appointment itself was almost like an act of Providence. Darwin was the third person picked, after two others (more prominent Naturalists) rejected for some reasons. His father didn't approved Darwin going for two year voyage, while he was supposed to start looking for a parish to settle in. Only after Darwin's uncle intervene, that his father softened, and finally gave Darwin his blessing—without which Darwin would have given up the voyage altogether, since he respected his father's decision very much. This was an aspect that I loved from the Darwins: love and respect from father and son. Later on after Darwin returned from the voyage, and was happy in doing researches and writing his books, his father totally accepted and never blamed Darwin for ever giving up his religious career. Darwin was also blessed with an amiable wife and supports from his friends, which later proved to be valuable to Darwin's career as Naturalist. Maybe it's because Darwin was himself an amiable person: humble, docile, and peaceful.

Darwin was neither a healthy nor strong young man when taking the five years voyage, and after settling with his large family while writing his numerous books, he was often tortured by his illness. But I think it was caused mostly by his moral conflict. Remember what happened to Galileo after publishing his heliocentric theory? He was accused of committing heresy. Now, Darwin always hated controversy. He would have stayed home and become priest, had his father rejected his voyage. He was perfectly aware that his theory of evolution would be strongly opposed by the Church and by the society. In 19th century the Church doctrine was that every creature was created as it was by God; and that they were all good. Darwin found out from studying tons of specimens he had collected during the voyage, that these creatures, which God has first created, has been evolving through years of struggle of existence, then formed various new sub-species. That would shock the world, and especially his wife Emma, whom Darwin loved and adored, and who happened to be a very religious person. These thoughts tortured Darwin so much in the form of many curious uncured physical symptoms. But—and this is what I most adored from him—Charles Darwin never flinched from his belief; and though he has promised Emma to never pursue the theory, he never stopped developing it in his mind, and secretly writing it. Darwin, who was a docile and peaceful person, dared to do it against all odds, because his conscience told him to speak the truth!

As all other new ideas, On the Origin of the Species did cause huge turbulence on scientific and Church history when published. These were the most insufferable time for Darwin, yet he never stopped researching and writing a lot of books, each of which opened fresh debates among scientists, as well as public readers. However, after the first blow from On the Origin, people began to accept his theory, and Charles Darwin became one of the most prominent scientists in the world.

Thanks to Irving Stone, the life, works, and the scientific world around Charles Darwin was finally revealed to us. Like Darwin, Stone have done meticulous researches around his subject. The project took him five years to finish; the same time for Darwin to collect his specimens and notes aboard The Beagle. The book caught perfectly and beautifully the emotional struggle of Darwin and his peers during the rising period of science. The Origin is a monumental work. I was so grateful to have read it. Not only to know more of the Naturalist, but also to understand more of his works, especially On the Origin of Species. What a read!

Posted by Fanda Classiclit at 7:49 AM